⇨ W. Joseph Campbell is an American writer, educator, historian, media critic, and blogger. He is a native of Bucks County, Pennsylvania, and teaches graduate and undergraduate students at at American University in Washington, D.C., where he is a tenured full professor of communication  While at American, he has written seven solo-authored books including, most recently, Lost in Gallup: Polling Failure in U.S. Presidential Elections.

Now out: Lost in a Gallup

Campbell’s other books include two editions of the award-winning Getting It Wrong: Debunking the Greatest Myths in American Journalism (2010, 2017).

About Getting It Wrong, Commentary magazine said: “It may be the best book about journalism in recent memory; it is certainly the most subversive.”

Campbell also is the author of the critically well-received 1995: The Year the Future Began (2015). “Remarkable,” one critic wrote of Campbell’s 1995 book. “Compulsively readable” wrote another.

At American University, Campbell teaches such courses as “Myths of the Media,” “The American 1990s,” “Foreign Policy and the Press,” “Decisive Moments in Communication,” and “Seminar in Doctoral Teaching and Research.”

Campbell entered the academy after a 20-year career as a newspaper and wire service journalist. He filled reporting assignments from across North America, and in Europe, West Africa, and parts of Asia. He reported from overseas as a newsman with the Associated Press and domestically for the Plain Dealer in Cleveland and Hartford Courant in Connecticut.

His assignments as a professional journalist included covering nuclear arms negotiations in Geneva, youth unrest in Swiss urban centers, threats posed by development to picturesque Switzerland, the challenge in the early 1980s to communist rule in Poland, spasms of political upheaval across West Africa, and the consequences of the world’s deadliest industrial disaster at Bhopal, India.

Campbell also is the author of two blogs, Media Myth Alert (launched in 2009) and The 1995 Blog (begun in 2014). Nick Gillespie, editor at large of Reason.com, has described Media Myth Alert “a national treasure.” 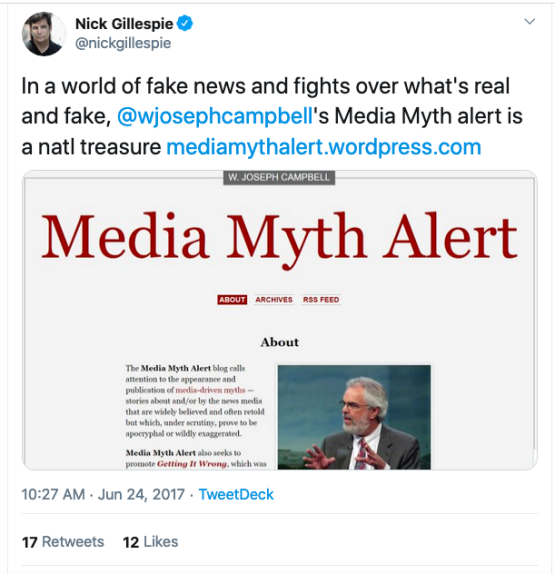 Campbell has discussed his research in invited lectures at the Library of Congress, the Smithsonian Institution, the New York Public Library, and at several major U.S. universities.

His other books include The Year That Defined American Journalism: 1897 and the Clash of Paradigms (2006) and Yellow Journalism: Puncturing the Myths, Defining the Legacies (2001). Both books addressed a poorly understood period in American journalism.

His first book, The Emergent Independent Press in Benin and Côte d’Ivoire: From Voice of State to Advocate of Democracy (1998), was an elaboration of his doctoral dissertation that examined the wellsprings of independent-minded journalism in francophone West Africa. He also is the author of The Spanish-American War: American Wars and the Media in Primary Documents (2005).

Campbell has conducted interviews with a variety of national and international news media over the years. Among them was an hour-long session in 2010 with Brian Lamb on C-SPAN’s Q-and-A program.

He also has been featured on C-SPAN’s “Lectures in History” series.

He also worked portions of four summers with University grounds crews (left), tending to the arboretum that is the AU campus.

Campbell earned his bachelor’s degree at Ohio Wesleyan University and his doctorate in mass communication at the University of North Carolina at Chapel Hill.

He also studied for a year at the University of Fribourg in Switzerland, where he played for City Fribourg, a Swiss semipro basketball team. Images of Fribourg, a medieval city that stradles Switzerland’s French-German linguistic border, are shown below.

Campbell and his wife, Ann-Marie Regan, live in suburban Maryland. 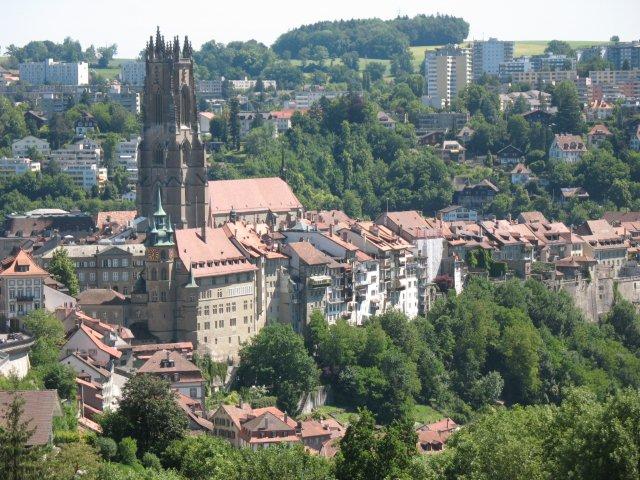 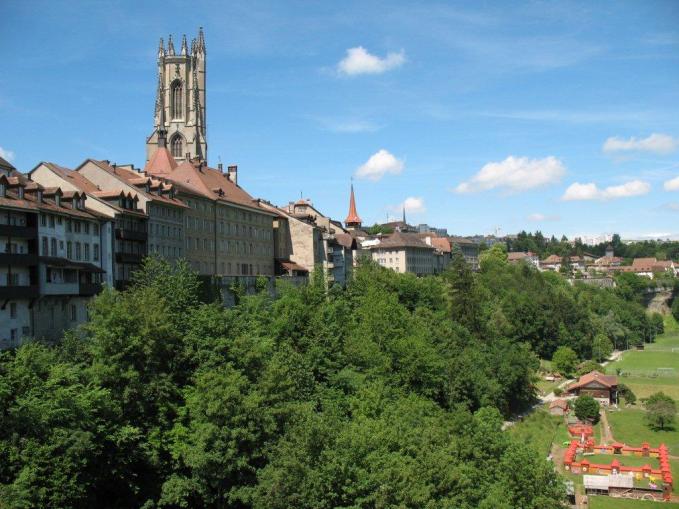