W. Joseph Campbell is an American writer, educator, historian, media critic, and blogger. He has written seven solo-authored books, the latest of which, Lost in a Gallup, examines polling failures in U.S. presidential elections. The book was published in 2020 and has been praised as “well-written, impressively researched, and detailed,” as a “fast-moving narrative history,” and as a “bracing reality check.”

Campbell’s work also includes the award-winning, media-mythbusting book, Getting It Wrong (University of California Press, 2010, 2017). Getting It Wrong inspired critics to refer to Campbell as “the man who calls journalists on their own B.S.” and “the master of debunk.”

He also is the author of the well-received 1995: The Year the Future Began (University of California Press, 2015) and The Year That Defined American Journalism: 1897 and the Clash of Paradigms (Routledge, 2006).

Campbell is a professor of communication at American University in Washington, D.C. He earned his doctorate in mass communication at the University of North Carolina at Chapel Hill. Before entering the academy, Campbell was a professional journalist for 20 years, a career that took him across North America to Europe, West Africa, and parts of Asia.

He earned his undergraduate degree at Ohio Wesleyan University which awarded him its Distinguished Alumni Citation at a ceremony in 2014, shown in the image below.

Covers of some of Campbell’s books 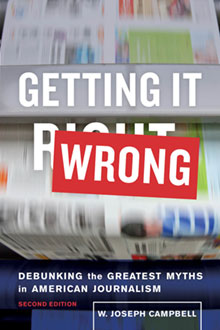 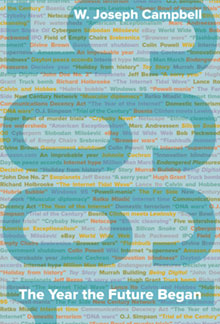 After a misfire in New Jersey, pollster offers a remarkable apology for error

(This essay was first posted at TheHill.com on November 12, 2021.) A refreshing departure from the blame-dodging tendency came the other day, following the outcome of the New Jersey governor’s race in which the incumbent Democrat, Phil Murphy, narrowly defeated Republican Jack Ciattarelli. The result represented another setback for pollsters, whose pre-election surveys collectively estimated […]

(This essay was first posted at the Media Myth Alert blog on August 27, 2021.) USA Today suggested in an editorial the other day that the chaos accompanying Joe Biden’s botched and precipitous withdrawal of U.S. military personnel could turn into a kind of Hurricane Katrina for the president. The reference was to the damage […]

Why polls failed in 2020 still unclear

(A version of this essay originally was posted at the Conversation online site on 20 May 2021.) More than six months after the acute polling embarrassment in the 2020 U.S. elections, survey experts examining what went wrong are uncertain about what led to the sharpest discrepancy between the polls and popular vote outcome since Ronald […]

Watergate at 50: Why the ‘heroic-journalist’ myth still defines the scandal

It’s small wonder that the heroic-journalist myth defines popular understanding of Watergate. Other than Woodward and Bernstein, no personalities prominent in Watergate were the subjects of a bestselling memoir, the inspiration for a star-studded motion picture, and the protectors of a mythical source who eluded identification for decades.

50 years on: Revisiting the myths of the ‘Napalm Girl,’ a photo ‘that doesn’t rest’

This essay was first published at The Conversation news site on June 2, 2022, and appears here slightly edited. The “Napalm Girl” photograph of terror-stricken Vietnamese children fleeing an errant aerial attack on their village — taken 50 years ago today — has rightly been called “a picture that doesn’t rest.” It is one of […]

Looking back 25 years: Alta Vista and ‘high-speed’ search for the early Web

It was the go-to search engine of the early Web, and it was launched on this date in 1995. The pioneer was Alta Vista, and its technology of using spiders to crawl and index the Web was an element of the gee-whiz marveling that sometimes greeted the unfolding digital landscape 25 years ago. Wired magazine […]

Twenty-five years ago today, in his closing argument at the sensational O.J. Simpson double-murder trial in Los Angeles, lead defense lawyer Johnnie L. Cochran stood before the jurors and urged them to keep this in mind: “If it doesn’t fit, you must acquit.” Cochran was referring to the prosecution’s case against Simpson and, in particular, […]